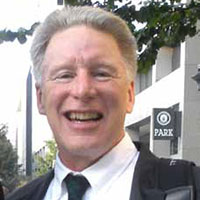 Dr. Lorenz earned an undergraduate BA, with a double major in geology and in anthropology from Oberlin College in 1972. After serving in the Peace Corps, Morocco, he earned on his MSc, thesis on a Moroccan Triassic rift basin, at the University of South Carolina (1975), and PhD, studying the Nubian Sandstone in Libya and Cretaceous strata in Montana, at Princeton University (1981). Lorenz has worked for the US Geological Survey in Louisiana and New Mexico, and for Sandia National Laboratories where he was the geologist for the tight-gas Multiwell Experiment in the Piceance basin. Lorenz has been a consultant since 2007 specializing in fractured reservoir characterization and effects.

Lorenz served as the Elected Editor (2001-2004) and President (2009-2010) of the American Association of Petroleum Geologists. As president he supported the advancement of the geosciences and their applications to hydrocarbon-related problems. His published papers on natural and induced fractures in reservoirs range geographically from the Lisburne Limestone in Alaska to the Spraberry Formation in Texas. These papers and presentations have been awarded the AAPG Levorsen (twice) and Jules Braunstein awards. Dr. Lorenz is also the recipient of the AAPG’s Sidney Powers Memorial Award in 2022. He has worked closely with the oil and gas industry on problems involving reservoir dimensions and in situ permeability, gaining extensive hands-on experience with core analysis and fieldwork. He has led field trips, presented core workshops, and taught short courses for the industry-oriented geological community in numerous places around the world.