SCA receives many queries about the “The Ten Habits of Highly Successful Oil Finders“. Since applying the best practices that are the foundation of the 10 Habits will help you, or your company, reduce the number of dry holes you drill, SCA has written a column elaborating each of the Habits. Here is the column for Habit 2.

Successful oil finders have a strong background in geology, and have a thorough knowledge of the tectonic and depositional environments for the area in which they are working.

Just as a strong foundation is essential to a good house, a strong background in geology is essential to being a successful oil finder. For most geoscientists, that foundation is set in school and augmented in the early stages of their career with corporate training. Unfortunately, for all too many in the industry, this is the extent of their geologic training.

Just as a well built house requires periodic maintenance to stay structurally sound, a long-term successful career as an oil finder requires continuing education. Our industry is rapidly evolving, and it is essential to stay in the know on new trends and technology. After all, how much did the majority of us know about the potential for developing hydrocarbons from shale when first starting out? Additionally, continuing education is critical when moving from one geologic setting to another.

Take for example the case of an experienced geophysicist, who shall remain unnamed. He had almost 20 years experience exploring in and mapping growth fault related plays and prospects in the Gulf of Mexico. He was known to be a successful oil finder. But then he was transferred to a position in the North American fold and thrust belt. His first assignment was to explore in a complex thrust belt known to have fault propagation folds as the main structural style. This geophysicist had little if any training in fold and thrust belts, but being known as an oil finder, he was expected to succeed in his new assignment. In this assignment, the geophysicist analyzed the geology, not from a fold and thrust perspective but from the extensional perspective he was familiar with. He mapped the key faults with listric geometry with hanging wall rollovers (Figure 1). 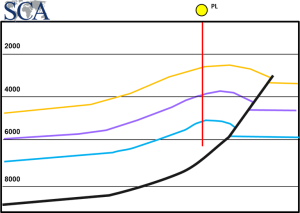 Figure 1: Fault Propagation Fold incorrectly interpreted with the fault having a listric geometry

However, the faults associated with this fold belt are fault propagation folds. Kinematically, they propagate upward from a decollement, causing the beds at the front of the fault tip to bend or kink forward and the fault has more of a planar shape ramping upwards often from the flat of another major fault surface. (Figure 2). 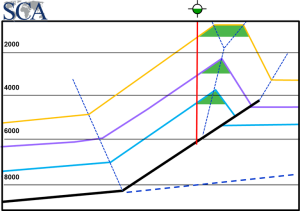 These career-jeopardizing mistakes could have been avoided if the geophysicist had obtained additional training in the tectonic setting that he was now working in. Whose fault is this, managements or the geophysicists?  One could argue that the company should have seen to it that their employees had the appropriate structural training for the area in which they were assigned. However, successful oil finders should take it upon themselves to ensure that they have the appropriate knowledge of the tectonic and depositional environments for the area in which they are working. This may require several additional training courses, as well as some applied mentoring before the geoscientist goes off on his or her own.

Are you seeking to learn more about specific geographic regions or deepwater reservoirs? Do you need to refine your knowledge of seismic sequence stratigraphy or structural styles? SCA has an exciting training line-up featuring short courses tailored to the requirements of upstream professionals.  Review our training calendar and take the next step towards ensuring your oil finding career is a successful one for many years to come.