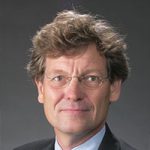 Leo Roodhart’s career with the oil and gas industry spans some 35 years in the areas of Production Engineering, Production Optimisation and Water Management, Strategic Innovation, Scenario Planning, and New Business Development. He was distinguished lecturer for the SPE in 2008. He served on the board of directors of SPE from 2005-2008 and became President of the Society of Petroleum Engineers (SPE) in 2009. In addition he served as committee member or chairman of a number of SPE conferences workshops and forums on well stimulation and water management

He worked as Senior Advisor Production Engineering for Shell International, performing audits and reviews of Shell assets worldwide. As global well stimulation expert, he designed and supervised fracturing treatments in Shell’s operating units across the globe, such as Canada, Venezuela, Germany, North Sea, China and the Middle East. He has written and presented numerous papers in the area of production optimization, hydraulic fracturing and acidizing, water management and was Distinguished Lecturer for the SPE. As Head Well Stimulation and Water management Research he was responsible for the development of Shell’s Fracturing and acidizing simulators.

His last position was head of Group GameChanger, Shell’s corporate strategic innovation program that identifies and sponsors the development of new breakthrough technologies in the context of the various technology futures for the oil industry. Leo retired from Shell in 2010, having joined the company in 1980 after acquiring a PhD in Mathematics and Physics.