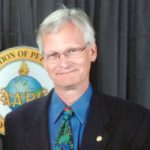 Prather graduated from the University of Kansas in 1979 with a BSc in geology. Following graduation he moved to the University of New Orleans to pursue a Master Degree in Earth Sciences, graduating in 1981. Prather then joined the Onshore Division of Shell Oil Company, New Orleans in 1981 as a summer intern and became a full time Exploration Geologist on January 1, 1982. He began his exploration career prospecting for oil and gas in the Smackover and Norphlet plays of onshore Mississippi, Alabama and Florida. Over time he moved to the offshore starting in the US Atlantic margin, then to MAFLA (the offshore of Mississippi, Alabama and Florida), and shelf provinces of Louisiana and Texas, eventually he ended up in the deepwater and Gulf of Mexico when he served as Division Geologist. He left New Orleans in 1995 for a 5-year assignment in The Hague, The Netherlands focusing on global deepwater plays. This work eventually led to creation of Shell’s Turbidites Research Team (TRT) which he lead until 2008 from locations in Rijswijk, The Netherlands and Houston, Texas. He returned to exploration in the Americas in 2008 as a Geological Advisor and eventually became Regional Chief Exploration Geoscientist in 2009. Upon retirement from Shell in 2014 he joined the University of Kansas as an Adjunct Professor where he teaches courses focused on seismic stratigraphy, petroleum systems and sedimentology.

He is an Associate Editor for the AAPG Bulletin, serves on both the SEPM and AAPG Research committees, and is a referee for many scientific journals. He was a Shore-Based Scientist for IODP Leg 308, which cored the Brazos-Trinity Basin IV in the Gulf of Mexico. Prather currently is the Chairman-elect for Executive Committee of Geology Associates Advisory Board to the Department of Geology at the University of Kansas.