SCA receives many queries about the “The Ten Habits of Highly Successful Oil Finders“. Since applying the best practices that are the foundation of the 10 Habits will help you, or your company, reduce the number of dry holes you drill, SCA has written a column elaborating each of the Habits. Here is the column for Habit 8.

As we have discussed before in Habit 1, our interpretations and maps must be valid in three dimensions.  One way to ensure three-dimensional validity is to map multiple horizons, especially for faulted structures.

In Figure 1, we see a depth structure map for the 6000 Foot Sand, a key producing horizon in a Gulf of Mexico field. The horizon is crossed by two faults (Fault A and B) which intersect each other with a compensating pattern (two faults dipping generally toward each other).  The interpreter picked Faults A and B and constructed fault surface maps for them. Then the fault surface maps were integrated with the horizon maps to determine the proper positions of the upthrown and downthrown fault traces. 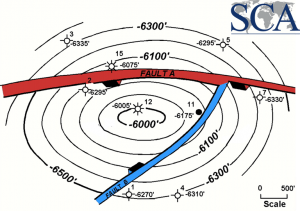 So far, so good! However, the interpreter’s boss asked to review the deeper maps the next day. So to save time, our interpreter used a common short-cut; he shifted the faults from their position at the 6000 Foot Sand level to their approximate position at the deeper levels (Figure 2). Based on those deep maps, the company decided to drill two wells (highlighted yellow, Figure 2). 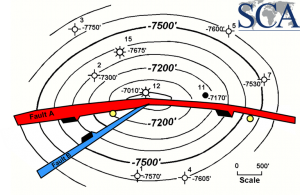 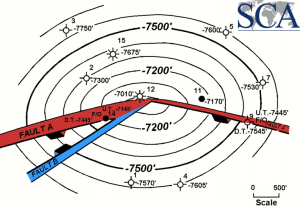 Many interpreters simply pick fault sticks which they use to determine the position of the fault polygon. Unfortunately, this method results in the fault being mapped in its approximate position as opposed to being accurately mapped.  Shifting the polygon with depth accentuates that inaccuracy, often causing wells to be drilled in the fault gap as opposed to the horizon.

One way to ensure the validity of the maps of faulted structures is to map multiple horizons and examine the way that the fault traces move with depth. The intersection of the two faults must migrate along the line of termination (red dashed line, Figure 4), which is the line on the fault surface map where the contours of one fault intersect the contours of the same value of the other fault. 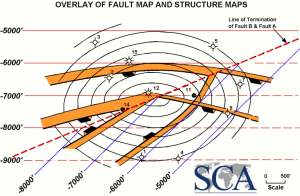 Constructing maps at multiple horizons also helps ensure compatibility between horizons. It also provides interpreters a better understanding of the structural architecture of the field or prospect. For producing fields, it is especially important to map all productive reservoirs.

In one National Oil Company, which shall remain unnamed, a number of teams were assigned to map and monitor producing reservoirs in a large producing asset; one team per producing horizon.  Furthermore, the teams worked on different floors, and were discouraged from talking to each other. One of the teams began to notice a sudden influx of water in several wells. The water level for this producing horizon was a long way from these wells, so the source of the water production was a mystery. The team re-mapped the reservoir, but could still not explain where the water was coming from.

Many weeks later, one of the team members was having lunch with a member of another one of the assets teams.  That individual mentioned that his team had been working overtime to resolve a production problem they were having. They had recently converted several depleted wells into water injectors. However, they had not realized any increase in pressure or production in any of the offset wells, and they could not account for where the water was going.

On further review, it was learned that the maps of any one team looked nothing like the maps of any of the other teams. Faults were not consistent from map to map, and the contour patterns from map to map differed significantly. In short, the maps were not three-dimensionally valid. And this for one of the company’s major producing assets. This issue could have been easily avoided had the teams simply worked together to ensure that all of their maps were compatible.

The moral of the story, map multiple horizons. It will help you know where the water is going. It will also help you to confirm the three-dimensional validity of your maps and interpretations, thereby helping to avoid dry holes.

Editor’s Note: To learn more about fault and horizon integration and other tools, methods, and techniques to help ensure accurate subsurface maps, register for SCA’s signature course Applied Subsurface Geologic Mapping visit scacompanies.com to learn more about SCA’s training program and other services, or to read more of the 10 Habits of Highly Successful Oil Finders.