Daniel J. Tearpock, Chairman/CEO of Subsurface Consultants & Associates, LLC (SCA), was recently honored by the AAPG Division of Professional Affairs as the latest recipient of the Heritage Award.  The announcement was made at an awards luncheon on February 29, 2012 at Del Frisco’s Restaurant in Houston, Texas.  The DPA Heritage Award honors an individual in the oil and gas industry who is generally known for substantial industry contributions, including significant discoveries, business accomplishments, and/or work in academia and publishing. Award recipients are selected based on having built a reputation for success in the industry, and having taken a proactive role in passing on their knowledge and experiences to the next generation.

The Heritage Award was first given to Michael T. Halbouty (deceased) in 2004. Other past recipients include such industry luminaries as Robert D. Gunn (2005),William L. Fisher (2006), M. Ray Thomasson (2008), and John J. Amoruso (2009). This year’s award was based in large part on the achievements of the company founded by Mr. Tearpock in 1988, Subsurface Consultants & Associates, LLC(SCA). SCA’s record of industry success includes consulting assignments with over 350 companies across the world resulting in the discovery and/or development of over six billion barrels of oil equivalent. SCA has also trained tens of thousands of students in a wide variety of upstream course offerings. Further signaling his commitment to training and education, Mr. Tearpock’s numerous articles and published works, including Applied Subsurface Geological Mapping(1991), Applied Subsurface Geological Mapping with Structural Methods (2003), and Quick Look Techniques for Prospect Evaluation (1994), are widely-used and respected industry references. 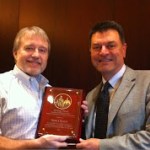 Upon bestowing the 2012 Heritage Award, current DPA President Marty Hewitt remarked, “Your business not only with SCA, but your leadership with the DPA and AAPG has taken this award to a whole new level.”

Reflecting on this honor, Mr. Tearpock commented to the assembly, “One of my goals was to do something significant for the world.  At first I thought I could find that billion barrel field, or find some new energy technology to help people…It ended up being training and consulting.  We’re now at over 23,000 people that we’ve trained, and the people we’ve trained are all over the world finding oil and gas.  Our consulting company has helped people find and develop over 6 billion barrels of oil equivalent.  So in a roundabout way, I was able to accomplish what I set out to accomplish in life…I could not find a better group of friends and associates than I have found working in the oil and gas industry.”

As a working geoscientist, Mr. Tearpock has generated numerous exploration and exploitation prospects, either as the sole generator or as part of an organized multidisciplinary team. Mr. Tearpock was a finalist in 1996 and 1998 for the Ernst & Young Entrepreneur of the Year program and in 1998 received the Distinguished Service Award from Bloomsburg University, Bloomsburg, PA. He holds a Bachelor’s degree in Geology from Bloomsburg University, 1970; and a Masters in Geology from Temple University, 1977. He is a (AAPG/DPA) Certified Petroleum Geologist No. 4114, State of Texas Licensed Geologist No. 2660 and (SIPES) Certified Earth Scientist No. 3015.

Mr. Tearpock is a member of numerous associations including the AAPG, SPE,SIPES, SEG, GSA, HGS, EAGE, NOGS, LGS, IPA, SEAPEX & PESGB. He is the past President of the AAPG’s Division of Professional Affairs (2011-2012). He is a founding member and current Chairman (2011-2012) of the intersociety “Joint Committee on Reserves Evaluator Training” (JCORET). The member societies represented on JCORET include the AAPG, SPE, SPEE, SEG and WPC.