This very popular program is designed for specialists and general managers who wish to broaden their knowledge of today’s international gas business with an emphasis on the commercial aspects of gas project development. Unit One covers the upstream sectors of the gas value chain with focus on exploration, drilling and well completions, reserves calculations, and field development planning topics. Unit Two subjects describe the entire midstream and downstream gas sectors with emphasis on technology, project economics, and markets that shape the international gas industry today.

This program will benefit management, administration, and specialists (technical, financial, legal, regulatory, and governmental) at all levels of gas industry experience who  wish to broaden their knowledge of the business environment and “best practices” of the natural gas business, especially the commercialization of gas projects.

This intensive two unit program has a lecture and business game format. Lectures are taught by a group of highly experienced gas industry specialists and the innovative gas industry workshop is facilitated by a project simulation specialist. Participants, working in teams, learn by making real-life technical, economic, financial, and market decisions that confront managers in the international gas business every day.

This classic IHRDC business game and workshop, which is fully digitized, consistently leads to very high praise from participants for its realism, stimulation of the learning process, and the benefits of working in teams with diverse backgrounds. 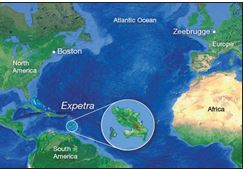 This business game is an integral part of the learning process. Participants, divided into teams, make real-life technical, financial, and market decisions that commonly confront managers in the international gas business today. Team performance is measured on  a  financial basis and is catalyzed by healthy competition.

The challenging Atlantic Basin business game takes place in “Expetra,”    a small island country in the Caribbean, north of Trinidad. Gas and condensates are expected to be discovered in the deep offshore.

Teams enter into exploration agreements, explore for and discover hydrocarbon resources, and then decide on the best way to market them over a 15-year production period. Markets include LNG exports to the U.S. and Europe, LPG and ethylene plants, gas pipeline to Miami, gas distribution and storage operations in the U.S., power plants in the U.S. and Expetra, and export-focused ammonia, methanol, and gas-to-liquids plants in Expetra.

The workshop sessions include:

For this program there will be a senior lecturer. He will be assisted by a Workshop Facilitator who will direct the business simulation sessions. Their backgrounds are as follows:

John B. (Jack) King, is an expert in the developing and marketing of natural gas, both in pipeline natural gas and LNG,  with over 26 years experience in Mobil and ExxonMobil Corporations. Jack began his career as a production engineer      in the Gulf of Mexico. He then progressed through a number of senior executive natural gas marketing positions for   both Mobil and ExxonMobil affiliates in the United States, Indonesia, Qatar, Peru, Venezuela, Japan and Russia. From Indonesia, he participated in successful long-term LNG sales contract negotiations with gas consumers in Japan, South Korea and Taiwan. In Qatar,  he was instrumental in leading the successful LNG sales negotiations to kick-off the RasGas  LNG project with Korea Gas Corporation, as well as the lead negotiator in Mobil’s contract negotiations with Japanese buyers in the QatarGas project. He was instrumental in initiating LNG sales contract negotiations with LNG consumers in Thailand, Turkey,  Taiwan,    India and Italy. He led both Mobil Corporation’s efforts in the Camisea gas project in Peru  and  ExxonMobil’s  participation  in  the Venezuela  LNG project. As Project Executive for the Sakhalin-1 project, he concluded a successful feasibility study to bring pipeline   natural gas from ExxonMobil’s Sakhalin-1 project, in Russia, to Japanese utilities and concluded a successful long-term agreement to bring pipeline natural gas to China from the Sakhalin-1 project. Jack received a B.S. in General Engineering and Military Art from the United States Military Academy at West Point, New York, and earned a Masters in Business Administration from Tulane University.

Dr.  Erhan Aslan is a Learning Simulator Specialist and Program Facilitator at IHRDC. Dr.  Aslan began his career in Abu   Dhabi as a reservoir engineer at Kelkar and Associates and was involved in multiple projects on reservoir development   and characterization for fields in the Middle East and Russia. In 2006, he relocated to Tulsa, Oklahoma for his M.S. in Upscaling of Tight Gas Reservoirs within the Petroleum and Natural Gas Engineering department at the University of Tulsa. He then attended Pennsylvania State University, graduating in August 2013 with a Ph.D. in Petroleum and Natural Gas Engineering. His thesis was entitled Development of an Advanced Coalbed Methane (CBM) Numerical Reservoir Simulator.

During his studies at Penn State and the University of Tulsa, he taught classes on Drilling Fluids, Production Engineering, Well Testing   and Evaluation, Numerical Reservoir Simulations, and Rock and Fluid Properties for graduate and undergraduate students. He received the Outstanding Graduate Assistant Award from Penn State in April 2013. His areas of interest include reservoir characterization, development of numerical reservoir simulators, unconventional gas reservoirs, parallel programming, and static and dynamic reservoir simulation modeling.

The program will begin on the first day with registration at 7:30 am and end at 4:00 pm on the last day. Hotel details will be provided upon registration.